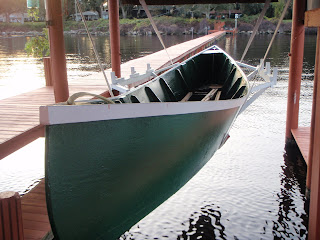 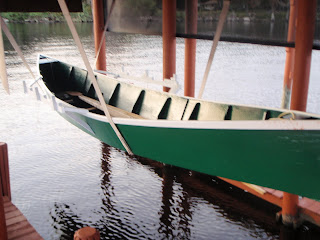 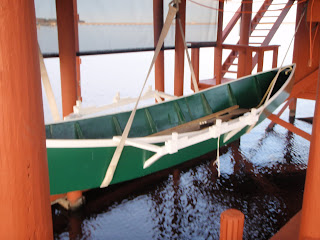 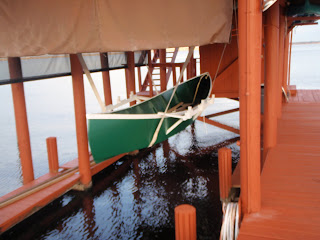 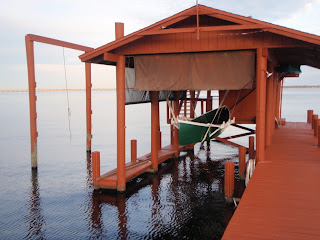 Here, I tell the tale of building my boat.  I now know that you too can build a boat.  Since everything takes 3 times longer and 3 times more money than you predicted, make it 3 weeks to be realistic, but, for me, it was a week.  But, they were 12 hour days, and alot of slop. You, of course, won't have that. 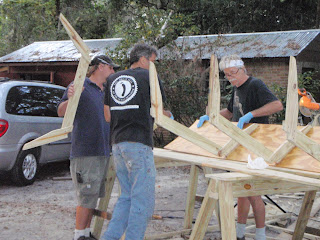 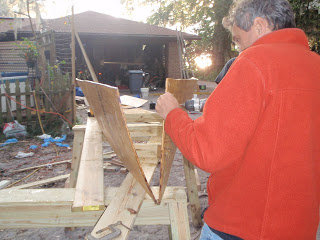 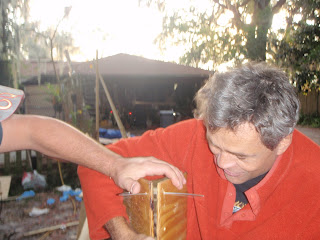 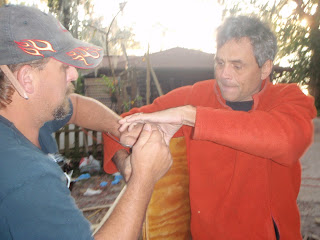 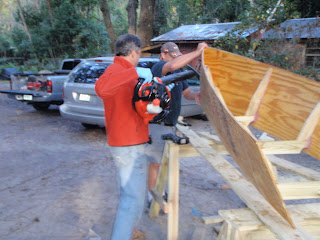 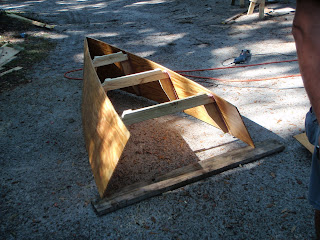 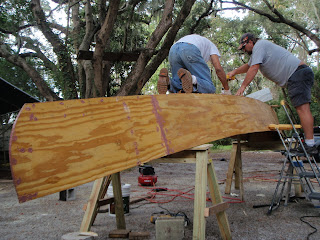 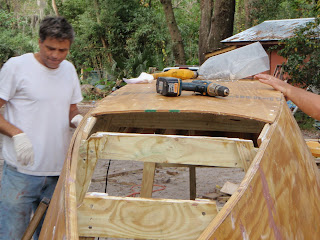 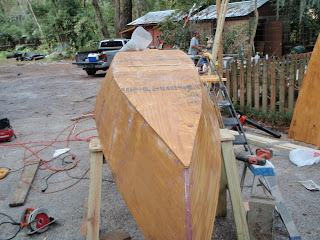 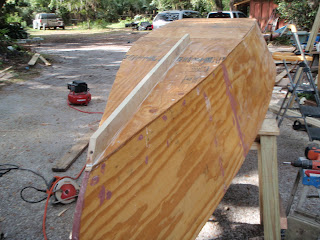 Speakers on your rowboat

My Boat is a 21 ft, 2 man homemade river boat. Wood outriggers, sliding seats. Flat bottom, so I can stand up in it.  It is stable as hell.  I don't think that , with the oars out, and you pulling , you can turn this boat over.  Regular plywood, and 2x4's cut down for the oars.  and a set of computer speakers.  Indoor kind, you know, the ones with the nice subwoofer, left, right, center and 2 rears.  Spread around the boat. Rowing to music, where both rowers are listening to the same thing, at the same time, pulling at the same time to the same beat.  Sounds alot like the proverbial roman slave ship, with a pounding drum, instead of your favorite song .  I recommend putting a harbor Freight 12 volt inverter,and a set of computer speakers on your boat, for your next best row.

Posted by Tom the rower at 3:00 PM No comments: 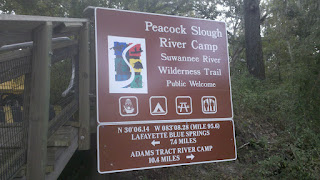 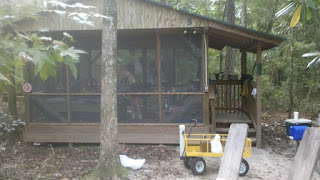 I would like to start my blog with a tale of a 40 mile row camping trip.  Here in Florida, we are blessed with many waterways, including the great Suwannee River.  As in the great old Stephen Foster song, "way down upon the suwannee river" fame.  The state owns great tracts of land along the river, and only recently have they set up official "river camps" that are only accesible by water.  So, since you can only get to these places by boat, and since most people who would destroy these camps are lazy, the up and up is that these camps are pristine. Absolutely perfect.  Each camp has 5 raised platform buildings with screened sides, metal roof, electricity, ceiling fans, your own picnic table and fire ring.  In addition, there are men's and ladies rooms with super clean, multiple toilets, as well as showers with hot and cold water. 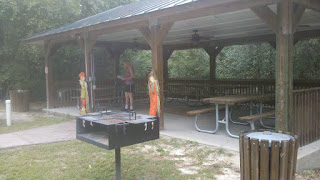 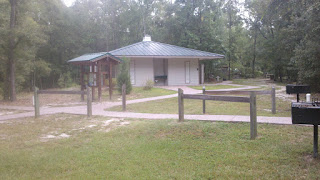 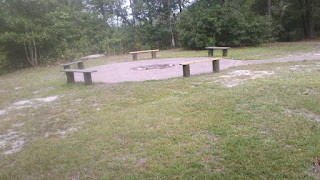 as you can see, there is a permanent council fire area with permanent seats.  Really well done, nice acid stained concrete, and a seperate cook building with a whole lot of picnic tables.  The place looks perfect for a boy scout troop to have a great gathering. 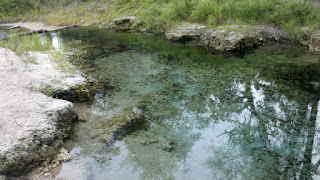 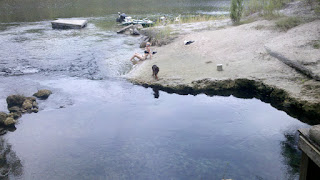 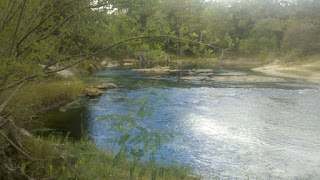 In addition to River Camps located every 10 miles, there are springs located all along the river.   The kayak/canoe rental places tell me that a paddler can do about 2 miles an hour, so that would be 5 hours of paddling, plus frequent stops for spring swimming.  But, we all know that rowers can go faster than paddlers, so.....   By the way, in Troy springs, pictured above with black floaty things that block boat access to the spring, has the remains of a civil war ship that the southerners blew up with black powder during the civil war.  The river level changes with the season, but the ribs of the ship are generally in about waste deep water.  I remember when my son was younger, years ago, he got a hand made nail out of one of the ribs.

Most of the springs have some kind of underwater challenge, provided by nature, such a archway that you must swim thru.  Must, as in, MAN test!!! You swim down about 8 feet, look thru the arch, see light on the other side and then swim thru. Watch your head coming up.  Great fun. 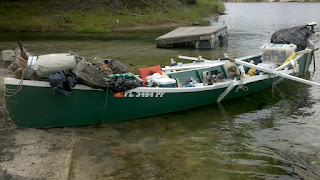 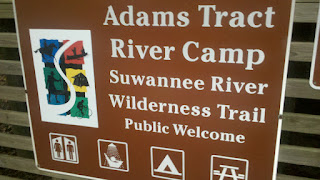 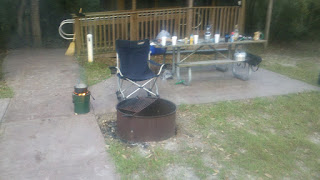 above is the Adams tract River Camp. You can see our raised platform and the chicken we cooked on our Cobb cooker, as well as the jiffy pop popcorn.  The next morning we set up our picnic table and boiled water for our morning coffee for the french press.  The fine guide who we hired to meet us at the starting point and take our vehicle to the pull out point was just the best guy. His name is Eugene Allen, American Canoe Adventures 386-294-1319 www. canoesuwannee.com. He also met us somewhere on the river each day and brought us ice.  A real lifesaver.  Due to a blowout on my truck and having to go into Lake City to buy new tires, we didn't make it to the put in point, Dowling Park, until 5 pm.  We had 10 miles to row until the first camp, that meant rowing for about 3.5 hours in the dark.  And let me tell you, it is really dark on the suwannee river when it gets dark.  There was no moon, and we were both rowing.  Near the banks of the river, where the trees are, it was really, really dark. So, we stayed in the middle where it was less dark. We knew that our camp was at the Lafayette Blue Springs, but how to find it.  In my hurry to pack, I had forgotten my GPS and all the Gps numbers for the camps.  So, about 10 pm, I pulled out my trusty Android phone, with it's built in google maps, and fired that up.  It showed that in about 3 more bends in the river was the Lafayette Blue Springs conservation area, and then sure enough, in the dark, on the port side, we could here the trickling of the springs spilling into the river.  We pulled in and sure enough, we were there.  Rowing in the dark; awesome.  It will keep you interested thats for sure.  It turns out that we were really lucky.  The suwannee river is fed from the Okefenokee Swamp on the border of Florida/Georgia, and when we went in September, it hadn't been raining up there, so the river was/is at record low levels. On the next three days we ran into multiple rapids during the day, rapids that probably would have tipped us if we had encountered them at night during that first night.  As it happened, that first night was perfect.  I brought a handle of cuervo Gold tequilla and plenty of mixer, in this case a number of Dole premixed juice blends, and I poured my first one as soon as we got into the boat at 5:30pm.  Poor Eugene problably thought we were rowing to our doom, starting at 5:30pm. with 10 miles to go before camp.

I will sum this up by saying that it was a really wonderfull trip.  School was back in, and we went during the week, so we absolutely saw no one.  We had the river camps to ourselves and all the springs were empty.  It was just about the best 4 days of my life. Rowing, tequila , cigars, food, and my wonderful wife.  Thanks babe

Tom the rower
I have a 21 ft, 2 man river boat, with external wood outriggers, and sliding seats. I row every day, usually at sunset, with music blasting from my speakers in the boat. I love rowing. It is my meditation.